An excellent example of a car which dominated the estate market in the late 60s and early 70s, which caused quite a stir on social media earlier this year, has been put on display at the Lakeland Motor Museum.

A tweet sent out by Drew Pritchard, presenter of TV’s Salvage Hunters – who got a sneak-peek of the car earlier this year, resulted in a spike of interest online as fans described the Volvo 145 as “stunning”, a “Swedish battle cruiser” and “a proper work horse”.

The museum’s Operations Manager Chris Lowe says, “This car has attracted so much attention in recent weeks. 30 or 40 years ago there were a lot of these on the roads, but you rarely spot one these days – certainly in this condition, so seeing one now unlocks a lot of nostalgia in people, even if they’re not huge car enthusiasts. This one is 46 years old this year, but it only looks six months old.”

The vehicle was donated by the same person who also gifted a Humber Hawk estate to the museum earlier this year, which has proved to be a massive hit with visitors. The Volvo, along with the Humber, were kept in immaculate condition, locked away in storage in North Yorkshire for 30 years.
A car parked in front of a truck

Description automatically generated
Chris continued, “Sadly, we have been informed that the owner recently passed away. We are therefore very proud to display this vehicle, partly in tribute to her. This car is part of her legacy now and we send everyone who had the pleasure of knowing her, our very best wishes.”

The Volvo 145 Estate quickly established itself as the market leader in the UK for large estate cars from 1968, but despite the success of both the Volvo 145 and the Humber Hawk, finding either of them today in this kind of condition is very rare.

Chris says, “That makes the discovery of both cars in such good condition an even rarer feat. This Volvo, along with the Humber which went on display here at the Lakeland Motor Museum in March, are both icons of the late 50s, 60s and early 70s. We’re thrilled they have captured the imagination of so many people and we’re delighted to be able to finally show-off the Volvo 145 alongside the Humber Hawk and the rest of our collection.”

In all, more than a million Volvo 140 range cars were built before being upgraded into the 240 range, announced in 1974.

Chris added, “As an interesting little anecdote, 2019 marks 60 years since Volvo invented the V-type three-point seat-belt, before then giving up the patents on its design to allow all other car manufacturers to use it in their models in the interests of wider road safety. So, whatever you drive in 2019, there’s little bit of Volvo innovation in every car, regardless of the make.” 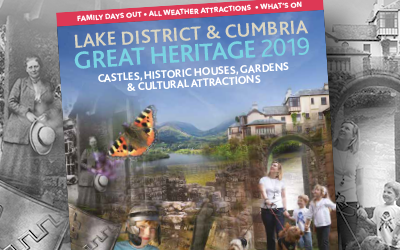 Latest news from all of our great houses, gardens and cultural attractions. Newsletter Sign-up